The Illusion of High-Tech Marketing

This article and the following articles are based on Geoffrey A. Moore’s book, ‘Crossing the Chasm’, which explores the ways of marketing and selling disruptive products to mainstream customers. We will now examine the first subtopic in this article which is based on the technology adoption life cycle.

In a technology life cycle curve, we have the innovators, early adopters, early majority, late majority and the laggards. However, we need to understand their importance before exploring these individuals in detail. It turns out that individuals’ attitudes toward technology adoption become essential at any time if they are introduced to products that require them to change their current behaviour or to move away from other products and services. Academically speaking, change-sensitive products are known as discontinuous or disruptive innovations, and continuous or sustaining innovations are the standard upgrade to products which don’t require individuals to change their behaviour. 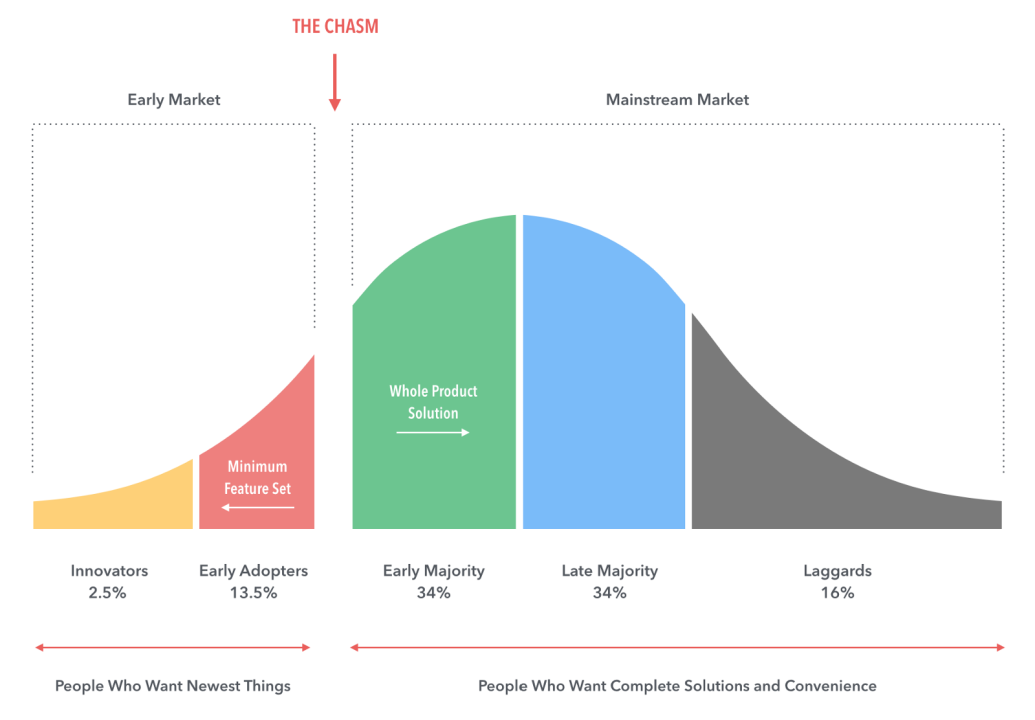 As you can see in this technology adoption life cycle, the early majority and late majority fall within one standard deviation of the mean. The early adopters and the laggards fall within two deviations of the mean, and in the outermost corner of the model on the left side, you’ll find the innovators. This group of individuals are categorized based on their different responses to a discontinuous innovation based on new technology. Each group has a different psychographic profile, a combination of psychology and demographics, making marketing responses unique from the other groups. It’s therefore essential to understand these groups and their relationship with each other for high-tech marketing. The innovators purchase new technology products aggressively. They sometimes search for these products before the product has been launched as technology interests them regardless of the type of function it performs. Innovators are attracted to any fundamental advance and always make a technology purchase for the pleasure of experiencing the product’s new features.

It should be noted that there are not many innovators in any market segment. However, it’s important to win them over at the very start of a marketing campaign as their support convinces the other players in the market that the product works.

Early adopters fall for new product concepts very early. However, they are not technologists like innovators. Instead, they are individuals who find it easy to imagine, understand and value new technology’s benefits and relate the potential benefits of new technology with their other concerns. Once early adopters discover a strong match, they are ready to keep their buying decisions on it. This is because early adopters don’t depend on references to make their buying decisions but depend on their own decision and vision.

The early majority shares some of the early adopter’s potential to relate to technology, but their buying decisions are based on practicality. They know that most inventions are just a passing cloud, so they are patient enough to see how others perceive the innovation before investing in it. They want to see proper references before they invest in the product. Since so many people fall in this group, about one-third of the entire technology adoption life cycle, it’s important to win them over to earn considerable profits and growth.

The laggards are people who don’t want any connection with new technology for various reasons, including personal and economic ones. They only buy a technological product when it’s included deep inside another product. For example, in the braking system of a new car, a microprocessor is fixed into it, and these people don’t know it’s there. In the view of market development, laggards are not worth pursuing.

According to the high-tech marketing model, the way of developing a high-tech market is to work the curve from left to right, focusing on the innovators first, growing that market segment, moving to the early adopters, growing that segment, and after that, moving to the early majority, late majority and the laggards. Companies must use each group as a reference base for launching their marketing to the next group. The idea of this model is to move the process smoothly and progressively to the following groups to make it natural for the next group to want to purchase the product. This keeps the momentum going. An additional motive for momentum is to be one step ahead of the following technology. For example, computers were displaced by laptops, and now laptops are likely to be displaced by tablets. If you lose this momentum, you will be overtaken by a competitor and therefore lose the advantages exclusive to a technology leadership position, especially the profit margin advantage in the middle to the last stages, which is the primary source from where lots of profit can be made.

This is, therefore, the high-tech marketing model, which is a vision of a smooth progression through all the stages of the technology adoption life cycle.

Cracks in the bell curve of the technology adoption life cycle

As you can see in the picture above of the technology adoption life cycle, there are gaps between each group, demonstrating the detachment between the groups. That is the difficulty that any group will face accepting a new product if it’s produced in the same way as it was by the previous group immediately. Each gap shows an opportunity for marketing to lose momentum, to miss the transition to the next group and therefore never gain the profit margin leadership in the middle of the bell curve.

Let’s explore the cracks in the bell curve a bit more.

The first crack is between the innovators and the early adopters, which occurs when a trendy technological product isn’t readily converted into a significant new benefit. The enthusiast will love the product for its architecture, but no one can understand how to start using the product. For example, let’s take VR. It’s a highly cool technology and was able to create its mark-up language – VRML. However, aside from one early success with Second Life, it has been identified by a sequence of experiments which are yet to be followed up on. The gap here is too significant between the Google class processing power required to create a seamless experience for people and the personal costs that would fund any of these applications. We can imagine technology getting there one day, but that day is way too far in the future, leaving VR stuck with the enthusiasts for a visionary.

Thus, the primary way to get beyond enthusiasts and win the hearts of visionaries is to demonstrate that the new technology allows some strategic leap forward which was impossible before that has an intrinsic value and appeals to the non-technologists.

Examples of products in this situation include home automation, programmable appliances, high-end cameras, telephones, scanning and project management software. The problem is that people who don’t frequently use these types of products find it hard to remember the protocols of the products. Therefore, users don’t use the features of these products mentioned above, and large companies in mature markets find it difficult to get paid for the research and development they have done as the user cannot gain and understand the benefit. They mourn that the product has become merely a product when the user’s experience of the product has become a commodity.

Bodies in the chasm

What exactly happens in this catch 22 situations? Firstly, as the product has caught on with early adopters, it has gained a lot of publicity such as holograms, pen-based tablets, fuel cells and QR codes etc. However, these offerings have not achieved mainstream market status even though they work reasonably well.

In the first year of selling a product, where most of it is done in the alpha and beta release, the emerging high-tech company enlarges its customer list to include a few technology enthusiast innovators and at least two visionary adopters. Everyone is happy, and at the first annual Christmas party, which is held on the business premises, glasses are held high. In the second year, the company wins several more visionary early adopters. The revenue meets the plan, and everyone believes it’s time to boost. All goes well, and the company Christmas party is at a hotel. At the beginning of the third year, a vast sales force expansion occurs, good sales collateral and advertising are sponsored, district offices are opened, and customer support is enhanced. However, halfway through the year, sales revenue worsens, and the expenses exceed the income. At the same time, R & D is delayed with many projects committed to in the early contracts with the original customers. The sales team complains that there are problems with the product line and the currently available product is overpriced, filled with bugs and is not what the customer desires. The engineers argue that they have complied with spec and schedule for all the major product releases, at which point the customer support staff groans. The executive managers accuse the sales team of not selling aggressively enough and not communicating the customer sufficient vision. This parable teaches one thing, what the company staff thought as a ramp in sales leading smoothly “up the curve” was an initial blip which we will be referring to as the early market and not the first indications of a growing mainstream market. This is the outcome of the high-tech marketing illusion, which is the belief put by the high-tech marketing model that new markets evolve continuously and smoothly. To avoid the dangers of the chasm, we need to achieve a new state of high-tech marketing model by exploring deeper into the dynamics of the technology adoption life cycle to correct the defects in the model and provide a safe basis for marketing strategy development.

Understanding the technology adoption life cycle and the high-tech marketing model is essential. This is to understand the different types of customer segments and how their attitudes towards technology adoption become necessary if they are introduced to products that require them to change their current behaviour or move away from other products and services.

Join a community of like-minded problem solvers and enjoy growing across work and life equally.

Manage Cookie Consent
To provide the best experiences, we use technologies like cookies to store and/or access device information. Consenting to these technologies will allow us to process data such as browsing behavior or unique IDs on this site. Not consenting or withdrawing consent, may adversely affect certain features and functions.
Manage options Manage services Manage vendors Read more about these purposes
View preferences
{title} {title} {title}

Menu
Connect With Us

Scale tech projects with dedicated teams minus the management headache

Streamline your business’s HR and payroll functions with ease

Simplify your IT journey with services that deliver family business outcomes 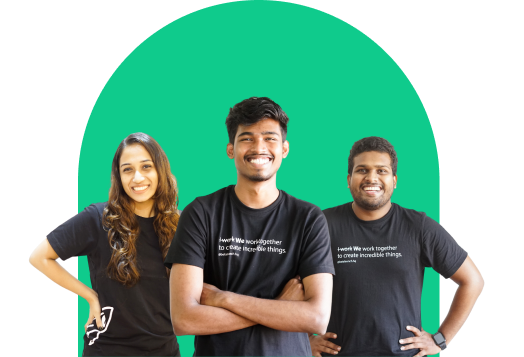 We’d love to understand your business and the growth outcomes you’d like to achieve.
Schedule Introductory Call

Design a visual and experiential prototype to test your audiences’ needs and pain points accurately.

Transform growth by scaling teams without the headache of hiring and managing them yourself.